About the Inn:
The Inn at Solvang is situated four miles north of Huntingdon on Route 26. Surrounded by forests and spacious lawns, the three story, brick, southern colonial home provides a tranquil retreat, or a gracious alternative to motel or hotel accommodations. Privacy is yours as well as the convenience of an innkeeper just steps away.

Originally designed and built by Huntingdon attorney C. Jewett Henry and his wife Phyllis, the home is filled with furnishings and collectibles reminiscent of their lives - a grand piano and harpsichord in the music room, an abundance of classic books shelved throughout the home, original paintings, authentic Persian rugs and elegant period furniture.

Today the home remains in the Henry family. It has been completely renovated to accommodate Inn guests and bring the rooms new life, using vibrant colors, murals, trompe l'oeil and stenciling. Breakfast is served each morning with Mrs Henry's originally china and silver.

History of the Henrys and Solvang:
The parents of Mr. and Mrs. Wald immigrated from Norway in the mid 1800's. Mr Wald was educated in Norway as an industrial engineer and Mrs. Wald spent summers of her youth in Norway with her mother following the death of her father in 1906.  They met in Norway and were married in 1910.  Phyllis was born in 1912 in Philadelphia and the family moved to Huntingdon which was strategically located for the headquarters of the first of three companies founded by Mr. Wald: the John R. Wald Company. Later, Prismo Safety Corporation and Wald Industries, Inc. followed with Their main offices also in Huntingdon.  The family maintained close ties with their ancestral land: Norway.

In 1920, John R. Wald and his wife Emma purchased a property called Sunset Park.  They renovated the building as their home and called it "Sunset". In 1936 their eldest child, Phyllis, married a young attorney : C. Jewett Henry and they purchased the Kagerise farm which neighbors "Sunset".  There was only an old storage building on the property as the house had burned and the barn torn down.  The Henrys built their home and called the property "Solvang".  Since the property had been farmed for many years, there were no trees in the fields which extended far up the hillside. Such a grassy field is called a "vang" in Norwegian.  "Sol" is the word for "Sun". hence the name "Solvang".

The Henrys moved into their home in March 1938 and lived until their deaths.  Mr. Henry died in 1979 and Mrs. Henry in 1992.  Their son and daughter-in-law, JJ and Pam Henry adapted the house into a Bed and Breakfast which opened as "The Inn at Solvang" in 1994. 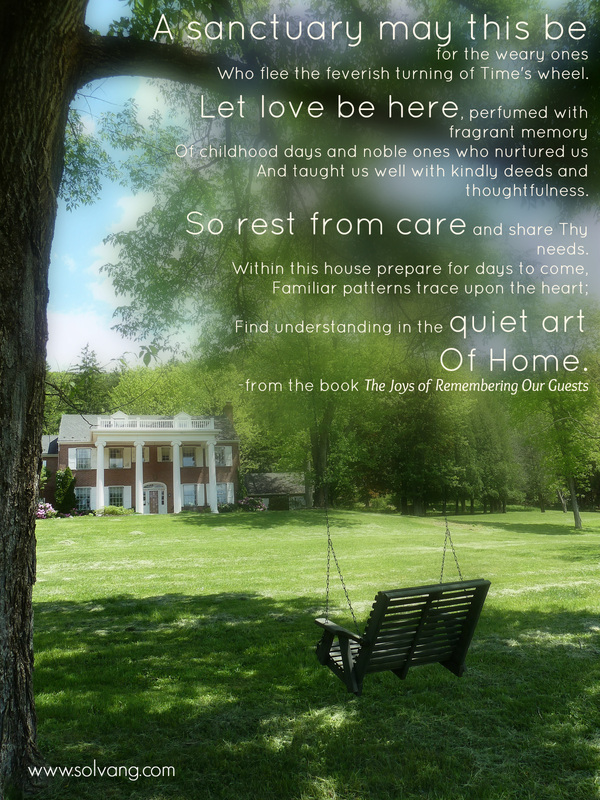